In Forspoken, you control the agile, angry Frey (voiced by Ella Balinska), slinging elemental attacks (and f-bombs) at multiple monsters before leaping off a cliff face and swinging from a molten outcrop. You keep moving, through the lands of Athia, through the adventure, because its really fun and satisfying, but also because when you slow down, you start to see the cracks.

Running on Square Enixs in-house Luminous Engine (the team that made the game is a newly-formed group called Luminous Productions), Forspoken gives some beautiful moments of magical pyrotechnics, but its not quite up to the consistent environmental beauty (and attention to detail) of games like Horizon Forbidden West or Returnal. Still, most of the elemental effects, Freys movements and a lot of the world of Athia is beautifully realized.

The matriarchs that control the world, the Tantas, are fearsome, with a fascinating array of spells, lots of intrigue and a great wardrobe. Fighting, talking to and learning about the four leaders and their fall from grace are some of the highlights of Forspoken. Luminous Productions even said that the Tantas were a labor of love for the team, and thats apparent.

Take Tanta Prav, the water-wielding Tanta of judgment (they all have a handy job title to explain how theyll probably rough you up): She is delightfully unhinged and argues with herself. Surrounded by her own watery creations, shes judge, jury and executioner except theres no-one left to judge. Until Frey kills one of her fellow Tantas.

Pretty soon after, shes raving in Freys face and you immediately understand that you will have to stop her. The broader story has peaks and troughs, but most of the great moments and set-pieces across the middle-end of the game involve the Tantas machinations. Try sneaking (or just rushing) into the castle of the Tanta of Strength, with ballistas firing gobs of fire at you and minions surrounding you even as you dodge the hellfire. Later on, another Tanta pulls you back into New York, and the environment playfully teases that all is not what it seems.

While most of the elemental effects, Freys movements and a lot of the desolate world of Athia is beautifully realized, other parts arent. The only populated region of the game, Cipal, is so underwhelming, relative to the antagonists and their fortresses. Take Auden, Freys first friend in Cipal, a city thats the final bastion of humanity in Athia. She often interacts with Frey in the first and final few chapters of Forspoken arguably she has more screen time than all but one of the Tantas. Shes also one of the main sources of information about Athia, why the Tantas are now unhinged despots and well, just how bleak everything is. End of the world aside, why does she look such a mess? Similarly, Tanta Cinta, whos pivotal to the plot, seemed to be modeled by whoever did the dirty to poor Auden.

Minor characters are even rougher around the edges. This isnt just a graphical problem either. Its obvious where less efforts been made. Open-world games with low-quality side quests (or game filler) are a regular occurrence Ive given up in the middle of Assassins Creed: Valhalla but the majority of tasks in Forspoken are just too dull and unrewarding. Im still chipping away at the game so if there are some pleasant surprises I will update this. But so far, its not looking good.

Following the primary story beats, while the magical parkour skills make dashing across land an effortless, speedy affair and definitely faster than horses theres not a lot of impetus to explore too much. One of the major landmarks are giant bird cages indicating locked labyrinths. But so far as Ive explored, they are simplistic junctions of monsters and corridors, with a sub-boss beastie at the end. Other sidequests lots of them are just like the fetch quests of Assassins Creed, Horizon, Ghost of Tsushima, Spider-Man and well, so many open-world games of the last 10 years.

Do you enjoy chasing things for collectibles? Welcome to the cat-chasing sidequests. How about doing it without your speedy magical parkour skills? Because thats the reality even when Frey is eventually accepted into the city, youll never get to dash across the city of Cipal, and leap up its walls. That means after youve traded with collectors, you will have to sprint like a normal human to the tavern. (Weirdly, the sprint button and the magical parkour button are not the same buttons, either.) The good thing is theres not much to keep you in this town. Even if its the only populated area in the game, its the least interesting. Take the tavern: During celebrations, you will get to experience the most inconsequential, pointless, real-time event dance-off. The button presses and timings have little or nothing to do with the jigs and the moves Thankfully, it seemed to be a one-off.

Forspoken may offer an open world, but you wont be able to confront the Tantas outside of the order the plot demands. Dont worry, the sassy bangle Cuff is around to offer a bit of banter between story beats. Its a weird relationship between Cuff and Frey: They both seem to dislike each other, but not in an endearing way. Frey may be able to traverse, well, pretty much everything with amazing ease, but despite Square Enix pulling in TV writing talent for Forspoken, there isnt much depth or even much of a character arc to enjoy. Many major plot points are shoehorned in the final third of the game, and Freys sudden mood shifts never seem all that believable.

Outside of the main campaign, Forspoken offers plenty of opportunities for exploration, but the rewards dont feel worth the time. When I unlocked a new cloak or accessory, theyd typically be specced way below my current equipment. Id have to go for another magical 5K run to collect herbs and other materials to upgrade things to a decent level. 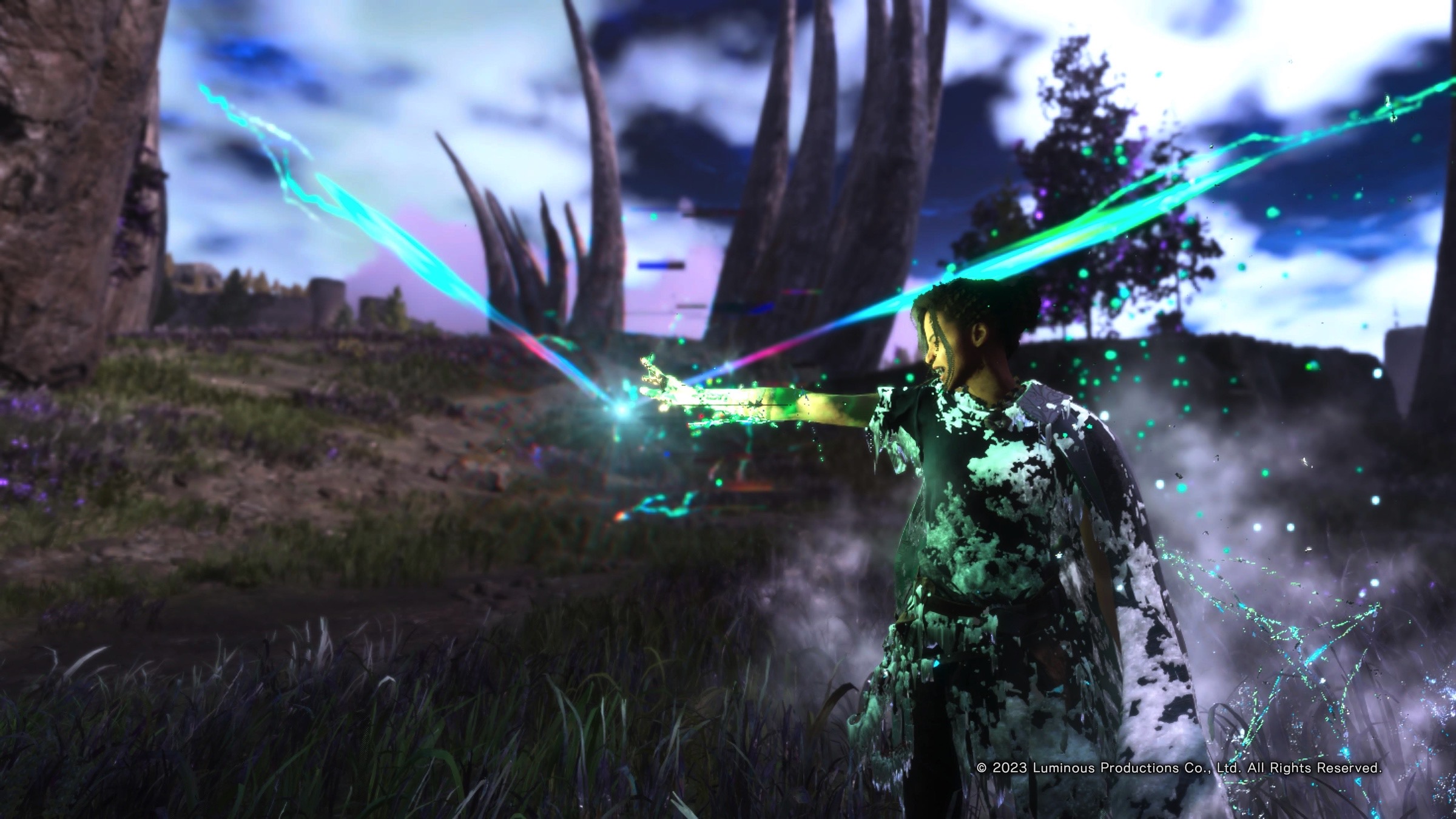 The sheer breadth of magical attacks meant I eventually fell into a pattern of using my favorites until I picked up yet another tree of spells from another fallen Tanta. (Its a shame you dont get access to the final set of spells until just before the closing chapters of the game.)

The battles, when the skills come together and the camera and lock-on mechanism is consistent, are a delight. You shift between support spells, summoning two lava soldiers while raining down water attacks, throwing a reality-shifting charm over a few other enemies so they start tearing each other apart. You line up multiple enemies and cast your super-spell, sending a carpet of poisoned earth spikes across the battlefield.

Coming across a particularly difficult foe, usually glowing enemies classified as mutants, often meant waiting to unlock a family of elemental attacks that were more effective. Or, simply, a matter of mopping them up on your way back from another part of the map, stronger. The rewards for beating these often never seemed worth the effort of a challenging battle (or remembering to circle back to that location).

At other times, an invisible enemy would slam into me from behind the camera. The worst fight was during one of the later boss battles with an electric bird beast. It will circle above a city, seemingly forever. Steering Frey, I struggled to land even the most straightforward long-distance attacks. I even made myself dizzy. As the camera continued to swing around and around and around. What should have been a slick showcase for Freys agility and parkour talents turned into a war of attrition with bonus motion sickness.

My quests and exploration would regularly be interrupted by breakstorms, sending a barrage of monsters at you monsters that wouldnt drop loot, sadly. At other times, breakstorms would end if you killed the monsters in specific areas or if you bested the super bosses that breakstorms would often spawn. Still working on that challenge, myself.

A lot of the story lore and worldbuilding is rooted in text snippets youll pick up in dungeons or rest spots I wish more was communicated through the characters. Without spoiling things, there are other twists that come across as cheap shortcuts, escaping the need for another lavish boss battle.

The core story will take between 30 and 40 hours, with some diversions. You can explore a handful of new areas post-game, but nothing so far is particularly captivating. Im avoiding spoilers again, but a wrinkle at the very end of the post-game leads to a very lazy solution for the conclusions of the story, to ensure Frey can still live her best magical life after the credits roll.

Forspoken, running on a PS5, is smooth enough, but it will still buckle under a wave of enemies and enough magical pyrotechnics. Cranking up the graphical fidelity with either ray tracing or 4K makes for a very choppy kind of a game, especially during frenetic battles.

Like me before the final chapter, Forspoken doesnt feel quite ready. Originally meant to launch in May 2022, this games already been pushed back a good nine months. Could it have done with a little longer? The main story is intriguing but too short, and the open-world distractions arent distracting enough. At one point, opening a pretty simplistic puzzle treasure chest there are lots of them Frey exclaims Boring!. Same, Frey, same.

Fortunately, the battle system is solid and fun, offering enough for gamers looking for an adventure, and hard mode is suitably hard enough to stretch anyone looking for a proper challenge. Frey references Alice in Wonderland several times, but after 30 hours the wonder had unfortunately dried up. If you enjoy the combat, however, and theres a demo to try out, you might forgive the dullness, and be willing to see how deep the rabbit hole goes.