Insights from the NoCode World

In late September, my FINN colleague Cornelius Schramm and I gave a keynote presentation at the Nocode Summit 2022, the largest no-code event in Europe. We had been invited to speak at the event by Benot de Montecler, co-founder of ncScale, the no-code software development lifecycle management tool. The plan was to share FINNs story of raising $900M (debt and equity) with no-code on the main stage at this major gathering in Paris of over a thousand no-code and low-code professionals and international speakers.

While no-codes conferences have been held on other continents, the Nocode Summit 2022 was the first Nocode summit to be held in Europe. It featured a great variety of talks and people, ranging from how to build a scalable secure web app with no-code tools, to leveraging the speed of no-code for emergency and crisis situations, to sessions on no-code gaming, collaborations, design systems, community building, and not to forget the no-code investment landscape. Participants attended from all over Europe and beyond. Speakers included CEOs of Glide and Make, of no-code app building platforms Bubble and no-code backend Xano, as well as individual freelancers.

In our keynote presentation, our main focus was on sharing our experience at FINN working with no-code and low-code tools. As some of my FINN colleagues have detailed in earlier articles (on running a no-code startup, automating HR with no-code, and business automation management), at FINN we got started with no-code with two objectives. First, to save time and money, given that no-code and low-code allow you to build things fast. And second, to ensure that everyone at FINN had access to all tools and to enable them to iterate quickly when building modern processes and tools. Quick building and iteration was especially important to us, as we wanted to move fast in a sectorthe automotive industrythat was generally content to work with an ancient technology landscape. FINNs vision was that no-code should be everywhere in the company from the beginning, and for a good reason: efficiency in building the company. 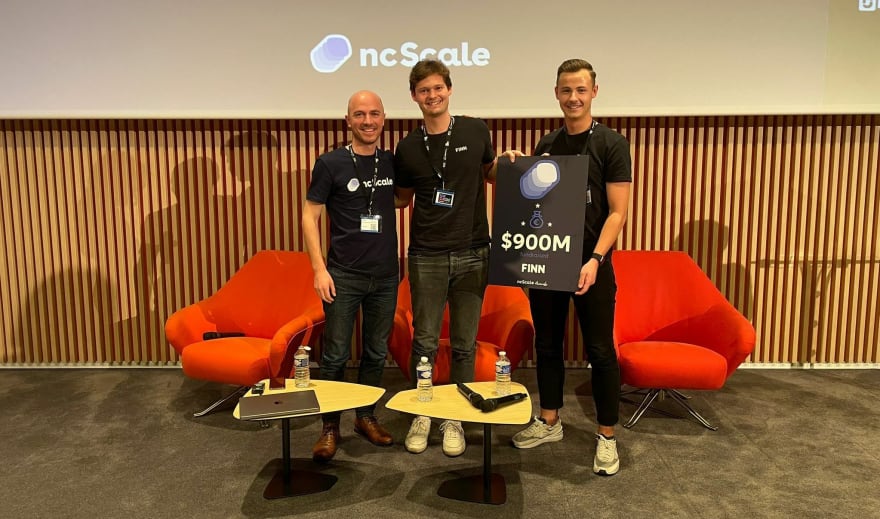 Speakers in our FINN keynote session: Benot de Montecler (ncScale), Cornelius and I

Another core point we covered was how FINN managed to scale up so quickly, in which using no-code and low-code tools played a massive role. Some of the issues that came up here, combined with our learning and tips, are: Monitoring of processes and automations is crucial. We handle bulks of cars, not only a few cars. Every process must run smoothly. With that also come considerations about the security of our landscape. Because everything can break easily when tools and automations arent properly protected. For example, we had several occasions where our website was down or empty, simply because somebody adjusted the wrong Airtable filter. That means we need proper security gates. A further core point we realized is that knowledge expires so quickly that it can be hard to keep up with documentation. At a certain pace of business growth updating documentation tends to hold you back instead of bringing value.

At FINN, we use no-code tools every day, and we use them extensively. We are among the top customers of low-code and automation platforms Airtable and Make.

We also shared some of our key learnings from our journey at FINN so far. Here are a couple:

Learnings, challenges, and the newness of no-code

Part of the game of attending a summit is of course not only to present your own learnings, but to absorb what others are doing and learn from that. The Nocode Summit 2022 offered plenty of opportunities to gain new insights. For example, we encountered some really interesting tools (as well as new uses of known tools) for building a business: such as Make for new types of automations, Airtable used as a database, Softr for internal interfaces, and Glide for building external interfaces.

Some organizations were also open about the challenges that they face around no-code. For instance, it can be hard to find people to execute ideas with no code tools, because as of yet no proper job description has emerged to capture the expectations and requirements. Some suggested titles that I heard floating around are: Product Maker, Citizen Developer, Product Creator, or as we call it at FINN, Business Automation Manager.

People have equally raised concerns when it comes to scaling with no code technologies. Some perceive no-code technologies as not yet being on the same level of power as pro-code (that is, writing code in a regular or specialized programming language). And there is also an issue of trust. Some people dont trust the no-code and low-code world as much as they trust the pro-code world. Why would that be? Well, the reason we learnt at the summit was that code developed from scratch does offer you a much more controlled environment. You have for instance Git for version control, you have direct control over deployments in your CI/CD workflow, you have a proper testing setup, you have distinct production and staging environments, and so on. But what we also learnt is that none of this should be surprising, given how new the no-code world is. Pro-code has a multiple decade headstart compared to the no-code world, which means that people are more familiar with it, and hence are likely to trust it more. No-code is a rather new phenomenon, with a lot of new tools and companies entering the market all the time. Which brings me to the final learning: namely, that no-code should really be understood as a movement.

Nocode is a movement

One of the major insights that I picked up at the Nocode Summit is that in 2022, you cannot describe no-code as anything other than a movement that is gathering momentum. Above all, no-code has the power to democratize technology access. According to research from Statista, in 2023 there will be a little over 27 million software developers in the world, on a world population of nearly 8 billion people. That means that only a tiny proportion of people in the world codes professionally, while the volume of software usage keeps growing. No-code can empower people of any background to quickly build new applications and automations.

As a company, using no-code platforms allows you to direct your engineering capacity strategically. For example, if you have several food delivery companiesthink of Getir, Flink, Gorillas, Wolt, Uber Eats, Delivery Hero, and the likethen those businesses will all basically have the same backbone, but with a slightly different value proposition for the customer. Each of these businesses employs its own engineers, who will all be building something very similar (say, a website, a mobile app, all with a similar logic behind it). But then it shouldnt be the case that all these businesses devote their engineering resources to building that same backbone. That would actually be a waste of engineering resources. Instead, it would be much more efficient to use no-code software for these processes, and then let your engineers work only on the most complex topics that are specific to each company.

Nocode allows developers to apply their skills to solve more complex issues, for instance around scalability, performance and UX/UI problems. Overall, no-code can allow entrepreneurship and innovation to flourish through easy access and use of tools to build and automate processes, yes even entire companies.

As I realized at the summit in Paris: the no-code scene is much, much bigger than expected. And its only getting bigger still. Next years conference, Nocode Summit 2023, is expected to have five times the number of visitors that it had in 2022. So Id say: Join the movement.

Huge thanks to Chris Meyns (@chrmns) for the massive support on writing this article.