Git Commands ( to ease your development )

Git is a prevalent version control system ( VCS ) used by most programmers. In this blog, I am going to share some tips with basic commands to make using git easier.

To start with git, we need to understand how things work locally on the system while using git.

This diagram will help to understand, what actually happens while using git locally. Starting with the working area, the working area is where the files that are not handled by git, it is the place where all the untracked files are kept. Staging area has files that are going to be part of the next commit. The repository contains all the project commits. Using the repository we can have files as it was at some point in time.

1. Initializing git in your directory

The very first step that you need to do is to initialize the repository.

This command helps you to set the username and user email address to be used with your commits respectively.

This command is used to see the state of the working area and staging area.

This command is used to add files to the staging area.

To take all the files that are untracked in the working area to the staging area, we use:

Here . specifies to stage all the untracked files.

To specify files that should be tracked, we can use their file name:

In order to stage abc.txt only.

The git commit command captures a snapshot of the projects staged changes. Generally, we keep a short message with each commit in order to understand that commit in the future as well as for other people to understand.

It is good to keep commits in the present tense and short ( about 50 characters ).

Here -m is for the message.

There can be cases when you cannot explain your work in some words, even in such a scenario we should not just write a very big message in a single line, because that will be tough to read such messages on GitHub. For such a scenario after staging some file, we don't just directly commit like above. We write:

When we write git commit without -m. You will see a console text editor known as Vim. 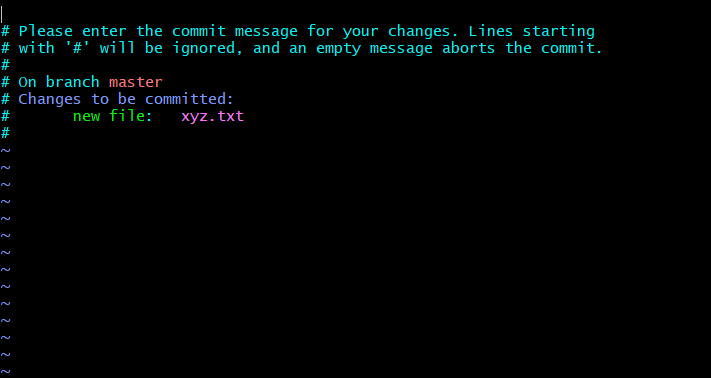 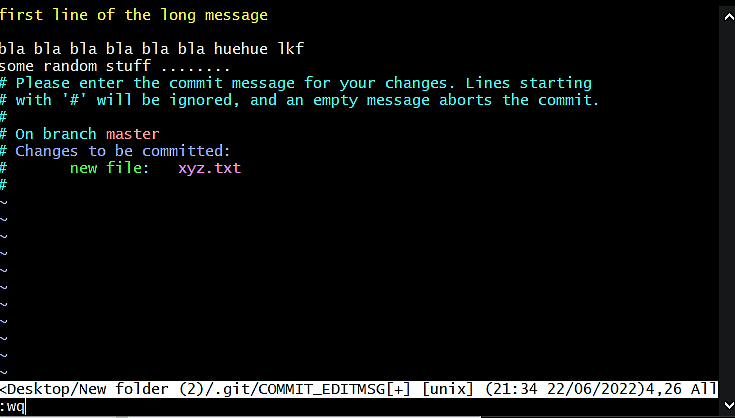 One of other useful git commit command:

This command will merge this commit with the last commit and it will have a new commit message.

The git log command displays all of the commits in a repositorys history.

There are many ways to see commit history :

The git show command will help to see details of a particular commit.

The git diff command is to see the difference between different commits.

To see the difference between commit with hash value 1c16945 and 9dcff6.

We can also use it directly.

This will display the difference in files of the working area and directory.

We can use - - staged with git diff

This will display the difference in files of the working area and staging area.

The git stash temporarily shelves (or stashes) changes youve made to your working copy so you can work on something else, and then come back and re-apply them later on.

Only the files that are in the staging area can be stashed.

After using git stash, if we use the command git status we will not see any file in the staging area.

We can also give a message while using git stash so that if we need it later we will be able to recall what we had done with the stashed files.

To view all the stashed changes:

To view some particular stash, lets say with index 1

The git branch command is used to work with branches in git.

To change the name of the branch, HEAD is currently pointing to:

To change the name of the branch irrespective of HEAD:

Currently it has commands only related to handling files locally. I will be updating it soon.