Back to Basics - JavaScript Hoisting 101

It's always a good time to review the basics of your programming language! In this series I'll be reviewing some fundamentals of JavaScript. It is important that we refresh ourselves on how the language works behind the scenes and of course it is also great practice to be able to explain concepts in simple terms.

This week we review Hoisting - what it is, function and variable hoisting, and a few key takeaways.

When your JavaScript code is compiled, variable and function declarations are "hoisted" to the top of their scope. Depending on where a variable is declared, the scope could be global or local. Either way, the variable declaration is hoisted to the top of that specific scope. Functions are also hoisted, but to the very top of the program. Functions are hoisted even above global variables. Hoisting is why you might see functions successfully called before they are declared - to make this possible they are pulled (hoisted) to the top of your program right before the code is executed.

It is important to note that when code is hoisted it is not physically relocated in your program. Instead, your program is scanned for all variable/function declarations and those relationships are saved in the lexical environment. Your code maintains its original formatting and structure while variable/function declarations are accessible via lexical environment.

declaration is hoisted, but not assignment of function value

This can be rather confusing at first, so let's take a look at the example below. You'll see that first an error is thrown because while the variable exists in the lexical environment, it remains uninitialized until the program reaches the line of variable declaration. Line 11 the variable gets initialized, but is assigned a value of undefined because there is no value assignment. Line 13 the variable is assigned a value which overwrites previous value of undefined.

hoisted, but initialized & assigned value once declaration is reached in code

Take a look at the example below which showcases let/var variables and their hoisting differences side by side: 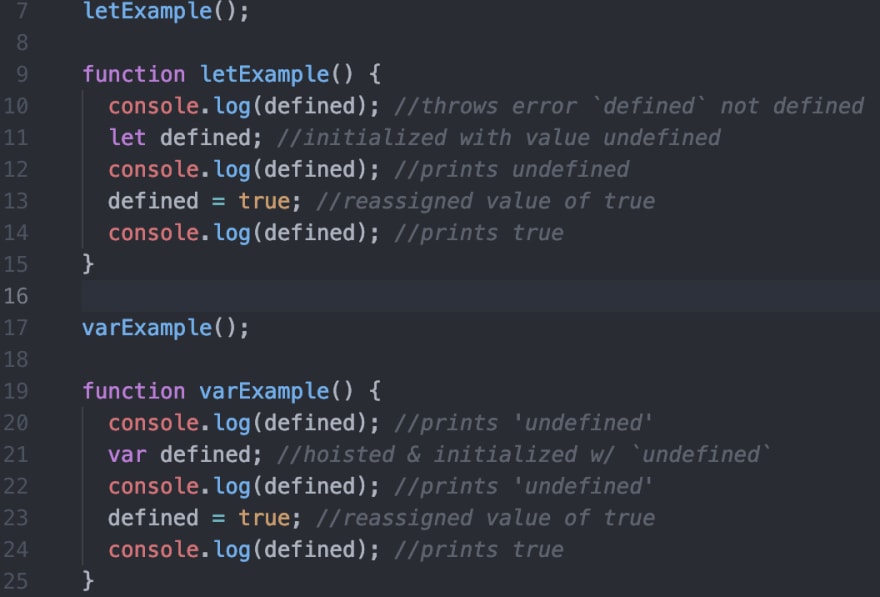